Subscribe to Drag News Magazine in print today. Drag News Magazine is a 64 page, full colour magazine that comes out every six weeks. You can get your subscription started for just $14.95! Each issue comes to your door, filled with Australian drag racing stories. For single issue purchases, please scroll down. Issue by Issue Print Subscription – Australian Postage ($14.95 every six weeks)   One Year (Eight Issue) Print Subscription – Australian Postage ($119)   Wanting international delivery? Email us at press@dragnews.com.au for rates. Drag News Magazine Issue 59 Print – 12 copies left Drag News Magazine Issue #59 – $15.95 When Jason found himself struggling, a chance encounter with his old friend Danny Selva led to the pair coming up with a plan to showcase Australia’s engine building talent in Pro Stock. This story by Rusty Gregory details the team’s journey to rebuild and reset for a shot at the championship. Plus, we check out the McClure family’s latest turbo Torana creation, find out what Shane Olive thinks about going Top Fuel, catch up with Warwick Dragway to see how their renos are going, and report on some of the best damn drag racing going in Australia right now! Please note that we have very limited quantities avauilable for single orders, so get your order in ASAP. Drag News Magazine Issue 58 Print – SOLD OUT Get your nitro fix with the latest issue of Drag News Magazine featuring Aeroflow Outlaw Nitro Funny Car star Josh Leahy! Coming from a family full of drag racers, Josh believes he has one of the best drives going in Australia – and who could argue? Find out about his climb through the ranks and the role his grandpa Roly played. We speak with Daniel Szabolics about the first five-second run on radials in Australia, and catch up with WA Top Doorslammer racer Daniel Gregorini. One machine we were very happy to feature this issue is Santina Keith’s Royal Enfield. Turning a relatively sedate motorcycle into a cafe racer-inspired dragster, Keith is an enthusiastic cheerleader for the sport with a fascinating background. Plus, Kevin Mcivor tells us what it is like to have one of the country’ most famous Pro Stock cars in his shed, and we catch up with the Grudge Masters from Springmount. With Sydney currently under restrictions for travel, we are aiming to get as many orders as we can before we go to the post office to mail out – so please help us by getting in your order early! Drag News Magazine Issue 57 Print – SOLD OUT In this issue we speak with Australia’s Top Fuel teams about their new championship series, which will see them take control of their own destiny. It has been a big few months for changes at the top, with ANDRA announcing they will be returning to running a Group One championship for Top Doorslammers and Top Fuel Motorcycles. We find out from ANDRA CEO Brett Stevens why now was the right time. And of course we have plenty of pages dedicated to highlighting some of the most amazing racers from around the country. Brandon Gosbell was well known to fans of two-wheeled drag racing but he has now become a successful addition to the Aeroflow Outlaw Nitro Funny Car ranks. We speak with Brandon about where his passion for drag racing has taken him and how he felt about the transition to nitro. Gary Halpin experienced the worst of drag racing when he lost his Datsun to an accident, but he took the opportunity to build a new one bigger and better, exactly how he wanted it. We check out V2.0 of his Datsun dreaming! We love when drag racing gets into unusual areas of life, and the Fusion Toyota Corolla certainly meets that spec. The turbo LS swap is cool, but the meaning behind the program is what really makes this a neat deal. WA Outlaw Radial champ Kevin Boulton tells us how he won on a budget that would put most heads-up teams to shame. Finally we cover the opening round of the Australian Drag Racing Championship and the Summit Sportsman Series, plus Nitro Up North and the Sydney Jamboree. Drag News Magazine is a full colour, 64-page print magazine and is available by online order only (we don’t do newsagents, sorry!). Issue 57 can be ordered using the links below and will be mailed to you directly! Supporting the magazine directly supports the sport of Australian drag racing. Drag News Magazine Issue 56 Print – SOLD OUT Drag News Magazine Issue 56 is now out, with a bunch of unique Australian drag racing vehicles that are sure to get your engine racing! Leading the way is Justin Walshe, whose Pro Alcohol Altered became a world record setter in May. We delve into what it takes to make a misbehaving altered travel the quarter mile in just 5.5 seconds. Nathan Cooper is blown as well, though the engine in his Gemini is a little more sedate than in Walshe’s altered! That said, it’s still a powerful machine and built with plenty of passion. Find out why Nathan made the switch from a turbocharger and learn more about the cool family history of the car. Tony Webb is zeroing in on his 275 radial ambitions, with a sweet Torana that turns heads in all the right ways. Though Webb reckons it is just some old tech, this thing is seriously quick! George Bukureshliev is a long time figure in the Sydney drag racing scene and he recently got back into driving his front engine dragster. What many don’t know about this chassis is the extensive history it has – and it has now been combined with a modern LS powerplant to make it the best of both worlds. Shifting to two wheels, and we speak with Edge Mallis about his world record holding Kawasaki H2 drag bike. It’s loud and it’s fast! This bike really had a different approach

In a major blow to the shortened ANDRA championship season, Sydney Dragway has cancelled this weekend’s Nitro Champs due to a forecast of rain. Following on from the cancellation of the Santo’s Super 3 Extreme event at Willowbank less than a month ago, the decision leaves just the Fuchs Winternationals in June left for the season. Sydney Dragway released the following statement: “Good Afternoon Ladies and Gentlemen Regretfully Sydney Dragway finds itself in a position of having to make the difficult decision to cancel this week’s Nitro Champs. The weather forecast for the remainder of the week indicates more rain with Saturday expecting as high as 90% likelihood of 10-20mm of rain. This leaves us with no alternative but to cancel the event. The venue is already under pressure from the weather with the grounds and car parks saturated and with more rain immanent this week the venue would not be user friendly. To all our competitors who have entered the Nitro Champs we sincerely apologise for any inconvenience this has caused. We will contact you later today via email with further details as to entry fees paid. We understand that this is an extremely shortened season and would like to wish everyone great success at the Winternationals.” Email Address Phone Number {fcomment} 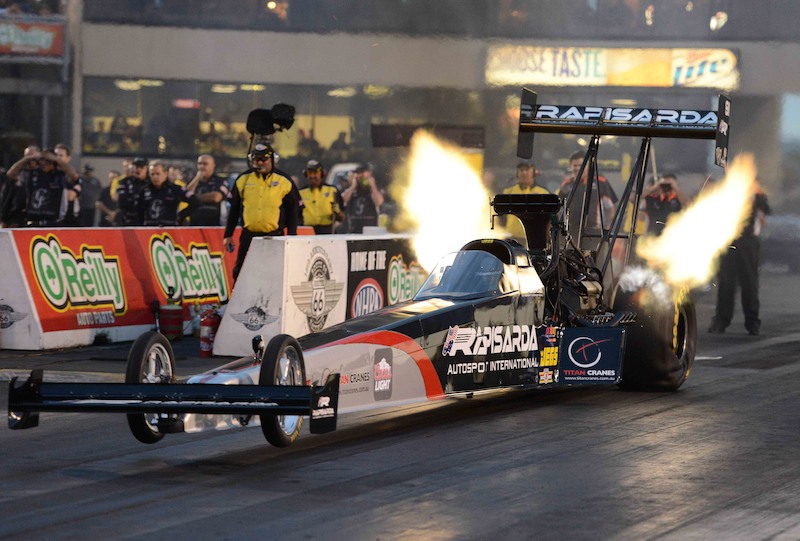 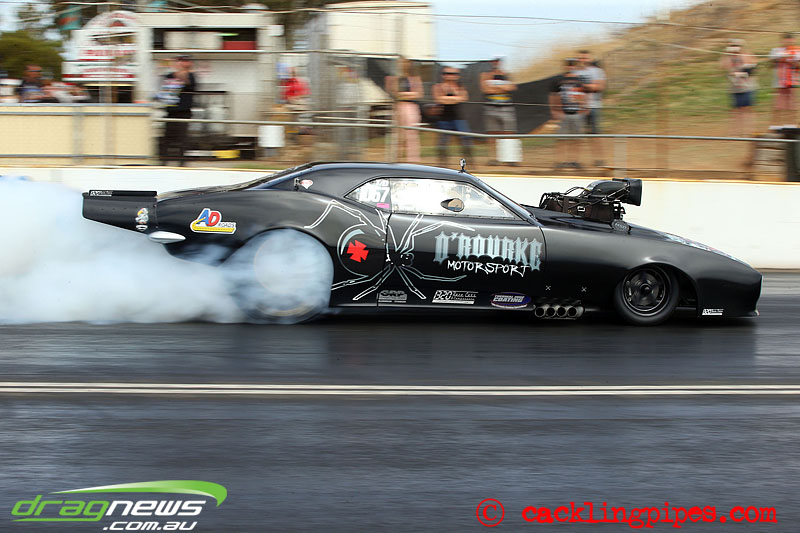 New South Wales’ Fire and Rescue heroes will be well represented at the Nitro Champs, with an officially endorsed dragster and its owner/driver Simon Van Ballekom set to be a part of O’Rourke Motorsports event campaign this weekend at Sydney Dragway. 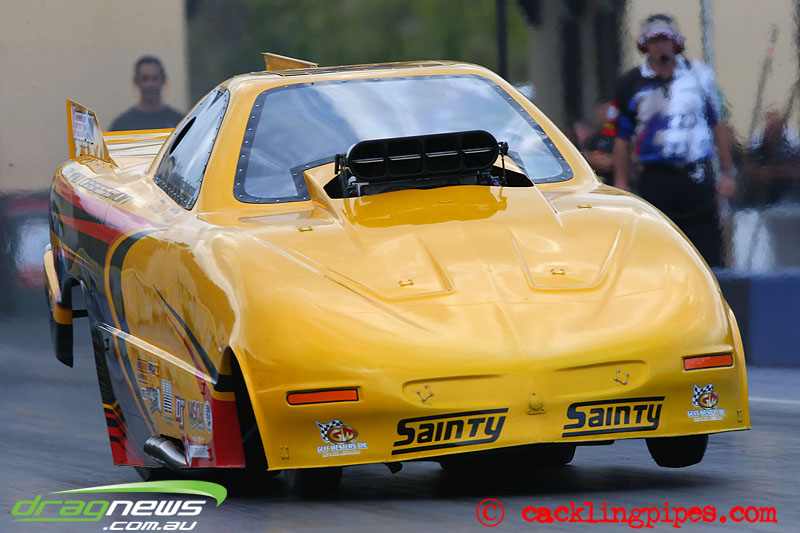 Rookie Top Alcohol driver Mark Hinchelwood is confident the Sainty Blind Obsession Funny Car is on the verge of a breakout pass with the team yet to run the full quarter mile distance. 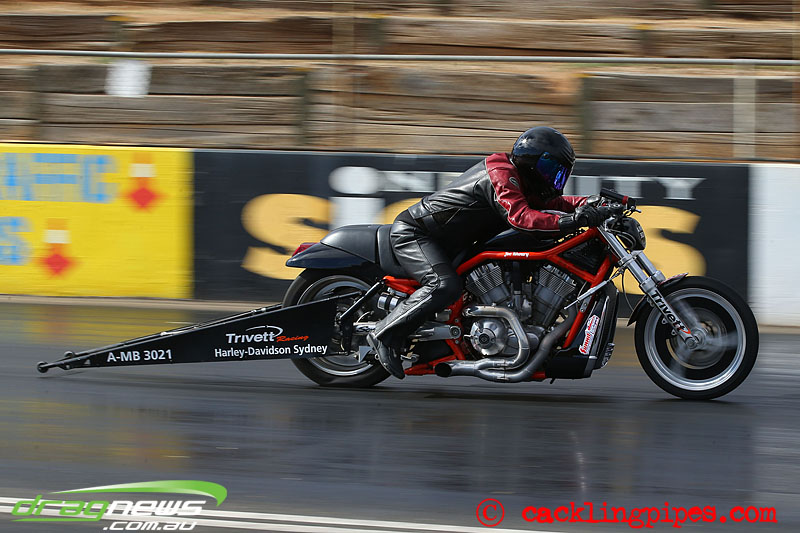 Joe Khoury has paid tribute to his Trivett Harley Destroyer for the remarkable consistency he has enjoyed recently in Modified Bike.