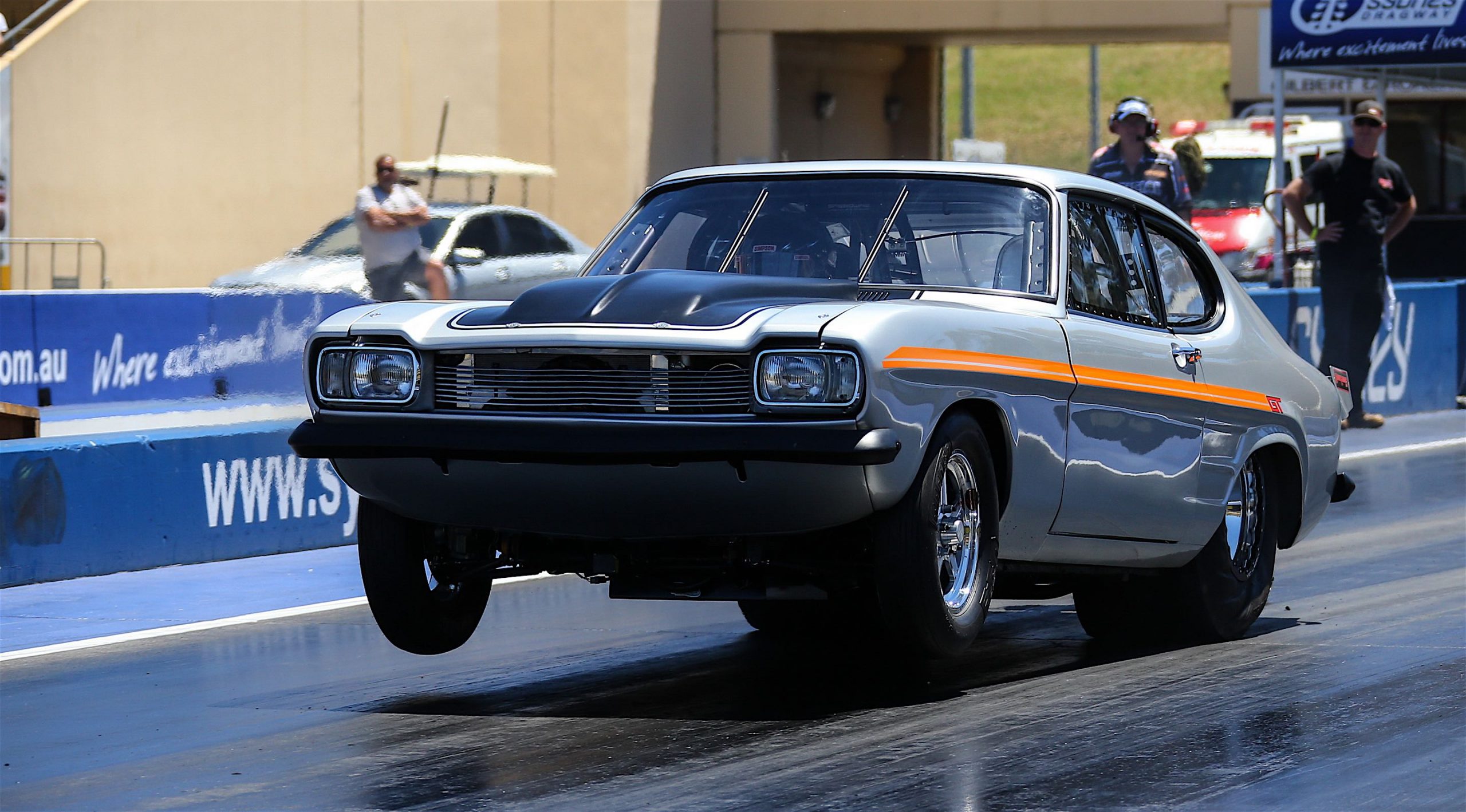 From techno to turbos – Carl Cox in profile

A world famous DJ has taken residence in Australia and his childhood passion for motorsport is being indulged in the ranks of Pro Street drag racing.   Carl Cox loves talking about his cars. Getting to discuss his hobby is a great change from promoting his latest tour or talking up a record label. We asked one question and he took 45 minutes with his answer – passion is no question in this guy. Cox’s formative years in England injected his love for all things automotive. One of his friends had a father who was a mechanic, specialising in fixing American cars. While the streets of late sixties and early seventies South London were filled with Minis, Zephyr Zodiacs, Morris Minors, Cortinas and other small makes, Cox got a window to a world of Chevy Impalas, Ford Mustangs and Pontiac Firebirds. “He had all these exotic American cars,” Cox remembered. “They took up all the road. First and foremost you heard the engine – the Minis and Morris Minors had nothing on the big V8s.” The same friends would go to Santa Pod Raceway and take Carl along to see street drag racing and occasionally events featuring Top Fuel dragsters, at a time when American stars like Don Garlits were doing world tours. “I was into it as a fan as a kid and I haven’t grown up yet,” said Cox. “All I wanted to do to my cars was to modify and go faster. Any car between 40 pounds and 120 pounds I used to get. They werw bangers that looked like crap on the outside but went like hell on the inside. I would buy anything and street race it and drag race it. “To go drag racing you need money, but I never had any. I would go to to the breakers yard if I broke an axle or engine mount ends and every weekend I went to the drags I would break something. I had to use the same car to go to work in as I raced, it was a labour of love.” Competing at Run What Ya Brung events at Santa Pod, Cox happened on a Mk1 Ford Capri and it was the fastest car he had raced at the time. Mostly stock but with a 45 Weber carb on it that did little more than make fuel economy worse, he eventually backfired the car and blew it up. With a burgeoning DJ career in the early 80s, Cox needed to switch from speed to reliability. “I thought this is not my calling, I need to find a car that will get me to my gigs, make sure I can make those parties, so I then bought more sensible cars that would work.” As his DJ career blossomed (see sidebar), Cox was able to set up a second home in Australia where he was often performing at events. Falling in love with the country and settling into Victoria’s Mornington Peninsula, automotive passions were once again inflamed. “When I moved into a holiday home in Frankston, I wanted to ride motorcycles again. I had friends who were into their motorcycles and I hadn’t ridden for 25 years, but the whole DNA of the motorbike went straight back into me. “That was it, I was back into the hood, riding up and down the Hume Highway on a 250 thinking I was the king of the road. I’d never felt the wind like that, or the b-double trucks trying to kill me, and I just had to get a bigger bike. “The friends I met with motorcycles were also into cars one of the guys was Rod Taylor. He had been building a Mustang coupe he wanted to keep as street as possible, but I could hear it two blocks away. He was telling me he runs ten second quarters – the quickest I ever did was 17s at 87mph! I loved it.” Cox had heard about the Calder Park drag strip some 12 previous and finally decided to check it out. The sights, sounds and smells took him back to his childhood at Santa Pod and he would be hooked. “I hadn’t been to the drags for years. I got to Calder Park and I thought bloody hell. I was watching Cortinas and Capris running 10s, 9s and 8s and seeing the twin turbos, in my day they were all N/A. They were running eights at 145mph as a street car and I thought you have to be kidding me.” Learning about all the modern technology that was going into these quick street cars, Carl got to meet Frank Marchese from Dandy Engines – famed for providing big amounts of reliable street horsepower. Friends mentioned to Cox that there was a neat Holden Premier up for sale, so he investigated what turned out to be a barn find restored into a Targa Tasmania contender. “He had the Monaro seats, striped bonnet, factory green paint, rally wheels, for me it looked really cool. 186, triple carbs and overbore pistons, but it wasn’t as powerful as you would think. I bought the car because I did want an Aussie muscle car in my collection. “I thought I would get more props buying that car but the boys all looked at me and thought I had been stitched up! They gave me so much shit and they said the engine was coming out. I said I had only just bought the bloody thing.”   – Thanks to our partners for helping bring you this content, article continues –           About 625 horsepower ended up going under the bonnet and for Cox that made it feel like a rocketship. He wanted to go to Heathcote to see what time it would do – but the timing could have been better. “Heathcote do a thing on Boxing Day, of course the night before was Christmas so we were all on the piss and the next day we were 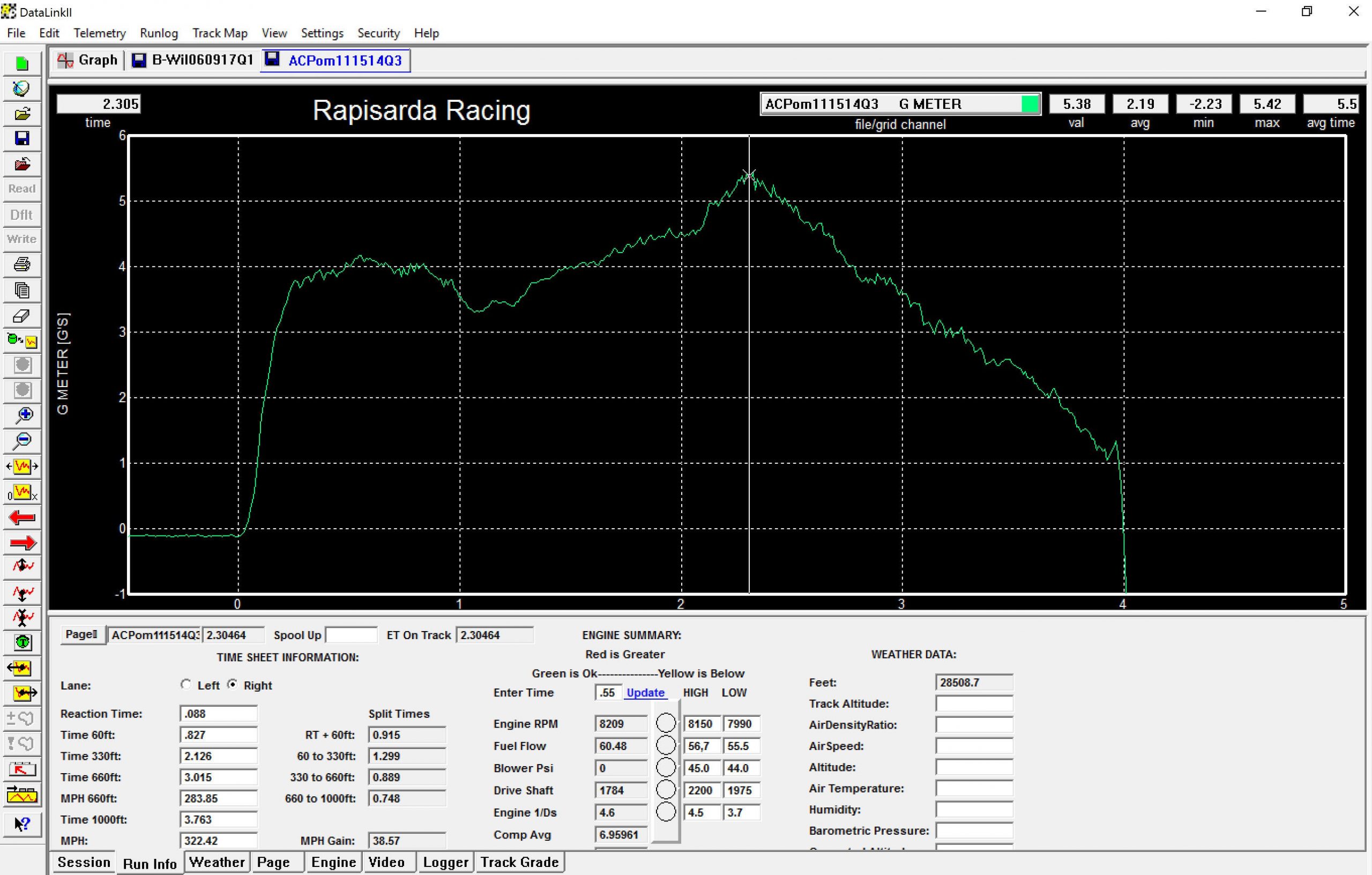 Where does a Top Fuel dragster accelerate the hardest?

Top Fuel dragsters are well known as the fastest accelerating race cars on the planet, but where do they actually accelerate the hardest? The answer may surprise you. We got in touch with Rapisarda Autosport International’s Santo Rapisarda Jnr and asked if he would send through a g-force reading from one of his runs – he flicked us through their personal best 1000 foot pass from Pomona, a 3.76 at 322mph.  It doesn’t take long for the car to reach 4G, in fact it’s shortly after it leaves the staging beams – within a quarter of a second of the driver hitting the loud pedal. What follows is kinda interesting! After about half a second the acceleration tapers off, down to just over 3G after about a second of acceleration. After that the magic happens (you can click the image above to see the full res version). The dragster has increased in speed and downforce from the massive rear wing is now pushing the car down on to the track surface, allowing the tuner to further lock up the clutch and unleash more nitro horsepower. Acceleration can now increase without the risk of overpowering the track. After that low point of acceleration at about 1.3 seconds into the run, a second later the Rapisarda Top Fuel dragster was pulling a peak of 5.42G at 2.3 seconds into the run, about where the car is passing the 330 foot beams (remembering that the data starts about .2 a second before the car will ‘roll out’ and start the track timing system). For comparison, a space shuttle pulls about 3G as it launches into orbit. A Bugatti Veyron might hit 1.5G under full acceleration in low gear. But for us the most amazing thing to remember is the Top Fuel dragster is already moving at around 150mph (a touch over 240kmh) before it reaches peak acceleration. For about one second (1.5 seconds after beginning the run) the dragster is pouring on over 100mph (160kmh) for each second of time. Imagine travelling along a freeway at 100kmh, then one second later hitting 260kmh!  As the speed increases, so does the downforce and the drag on the car, while the tyres have also grown, effectively making the gearing taller. All this conspires to reduce the acceleration before the end of the pass arrives and the parachutes come out. Thanks to Rapisarda Autosport International for sending us this sweet graph, it really does show just how amazing Top Fuel dragsters are! 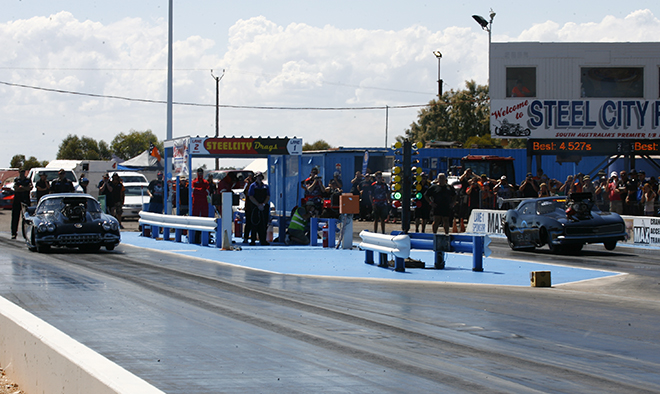 Whyalla’s Steel City Drag Club will be running a four round club championship as well as two sweet nitro events in what is its 50th season of operation. 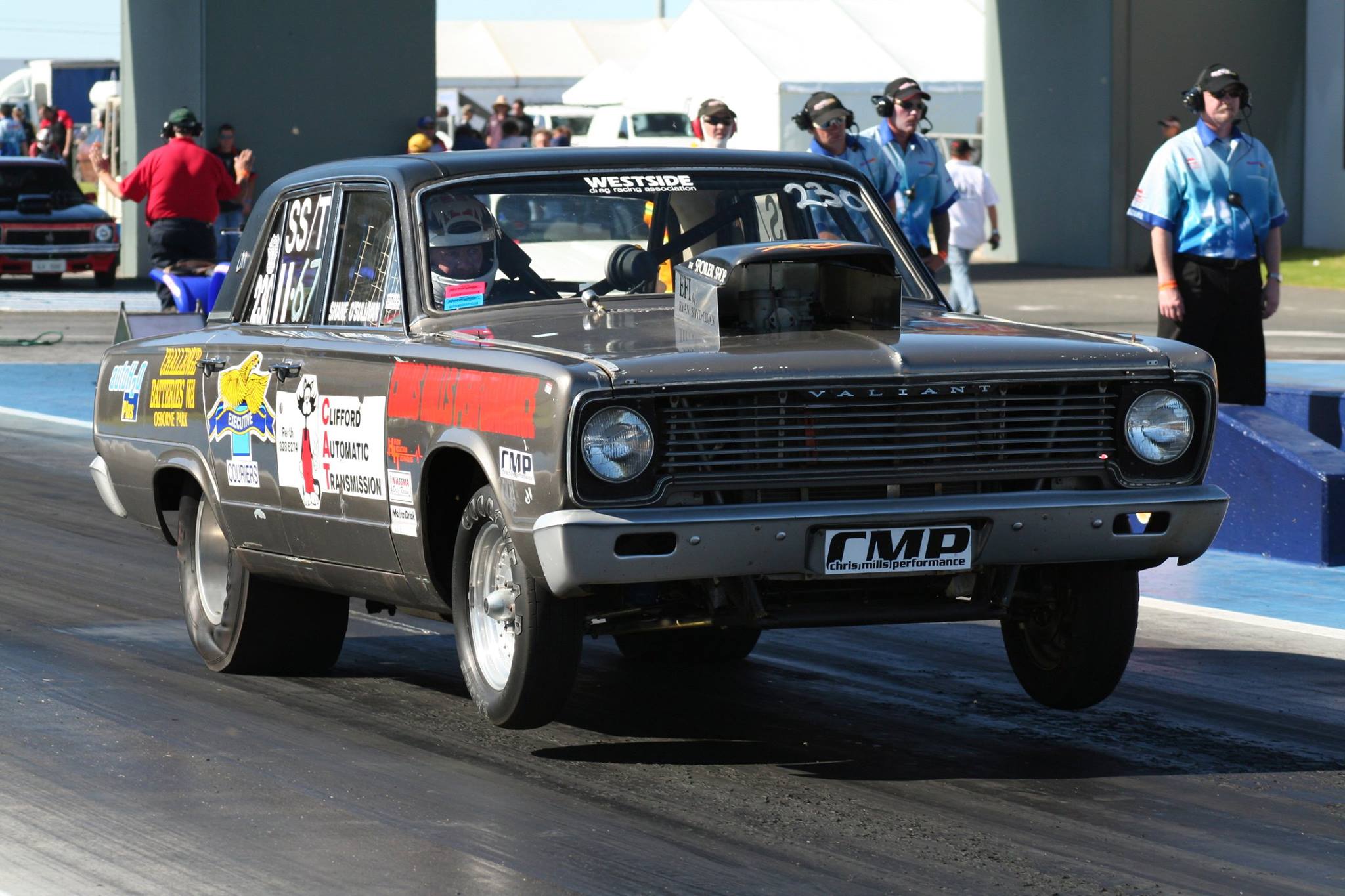 Over the weekend, the drag racing world learned the sad news that former Western Australian ANDRA Divisional Director Shane O’Sullivan had passed away following an illness. 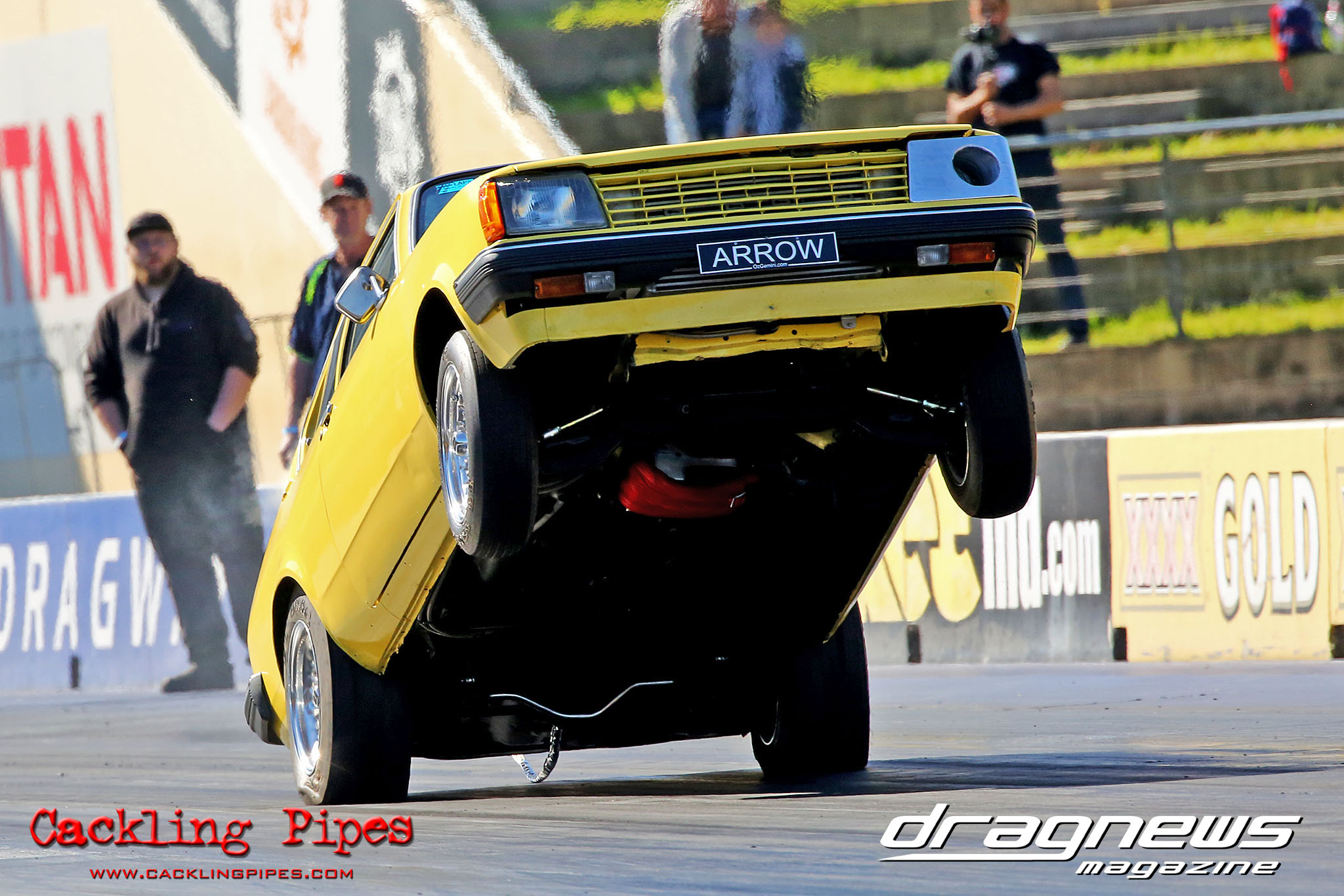 Scott Forrester’s four cylinder Gemini pulled off a spectacular wheelstand at the Sydney Dragway test and tune on the weekend, but that is not what impressed us the most. 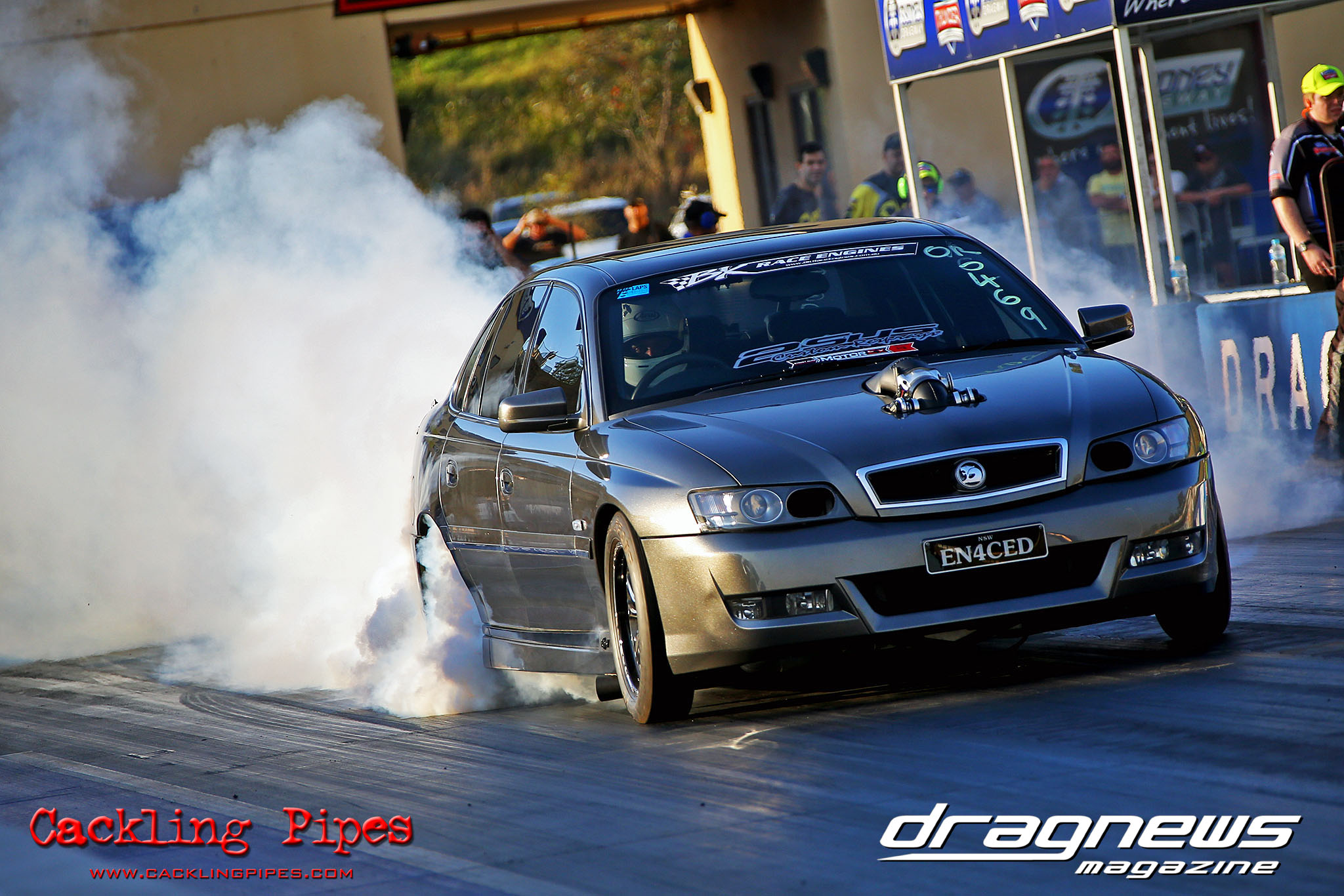 We featured Josh Calgaro’s twin turbo HSV Grange back in issue 22 of Drag News Magazine not long after the car was debuted, back when Calgaro had aspirations of running seven second passes. Well now following last weekend’s test and tune, that dream is now a reality.